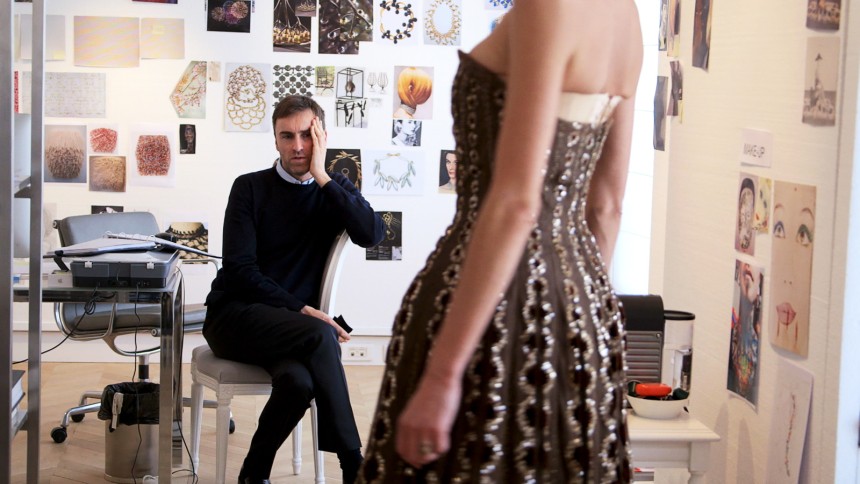 The art of fashion: Ex-Dior designer Raf Simons gives us new fabric to dream about!

In the autumn of 2015, designer Raf left Simons Dior to pursue new challenges. Now he was in Berlin to present a new collection for fabric manufacturer Kvadrat, and his example shows why it doesn’t always have to be the big stage.

Christian Dior has shaped the history of haute couture like no other. With his “New Look”, he played a major role after the Second World War in helping Paris New York lose its status as fashion capital. Dior himself later remembered that time as follows: “We had just survived the war. uniforms. Soldier’s wives with boxer shoulders. I drew flower women, tender shoulders, blooming torso, narrow waists and wide skirts. It turned out that my personal feeling corresponded to the general feeling.”

THE MASTER OF HAUTE COUTURE IS CHRISTIAN DIOR

It was Dior’s sense of style, his unmistakable feeling for the spirit of the times, that all of France knelt before. His influence was so great that critics spoke of a fashion dictatorship: In record time, he created one new trend after another – industry and wealthy women followed willingly. The press also summed up enthusiastically: “If Christian Dior says skirts are getting longer, they will get longer from Brooklyn to Central Africa. The master of haute couture is Christian Dior!”

Dior could only enjoy its fame for a short time. After only a decade in haute couture, he died at the age of 52 and left a legacy that his successors are still working on today, it almost seems impossible to hold on as chief designer in the Dior house for any length of time. Following the scandal surrounding John Galliano, who was expelled from the post in 2011 for anti-Semitic vulgarity, Raf Simon, who had taken over as head designer in 2012, also threw in the towel last autumn. Officially for private reasons, but unofficially it was quickly said that the pressure was too much.

“When you grew up in France, you heard about Dior every day, it’s already a legendary fashion house, there are only a few houses that still make haute couture, and Dior is one of them, there’s a secret about Dior, because you know almost nothing about what is going on inside the house, and the person Christian Dior also remains shrouded in mystery”, comments Frederic Tscheng, director of “Dior und ich” and “Diana Vreeland – The Eye has to Travel”. He has accompanied Raf Simons for his documentary for a long time and knows what a challenge it is to design a Dior collection for the 21st century.

THE TASK AT DIOR WAS A CHALLENGE FOR RAF SIMONS

It was noticeable that Raf Simons also had obvious respect for the task. The pressure was high, the work at Dior was risky for Raf Simons. He had no experience with haute couture. He also came from men’s fashion, the flowery style was not his world. Thanks to futuristic details and provocative staging, he was considered a “fashion terrorist”. Simon’s demanding task was to modernize the traditional brand, make it more dynamic and introduce contemporary elements without destroying the Dior myth.

“It’s fun, but it’s also hard. I certainly don’t mean to imply that I am even remotely as talented as Christian Dior,” the Belgian commented almost humbly after his debut. Then began Simon’s involvement with the late genius, from the first drawing to finding a location for the fashion shows. He was accompanied at the time by Fredric Cheng, who in “Dior and I” also recorded the discrepancies between the sensitive and extremely camera-shy Simons and the wishes of Dior’s martketing department. “Raf Simons is considered reserved and aloof, some even say he is cool. I quickly realised that this is only half the truth. Because I’ve been accused of using these adjectives myself. And I know they’re not true. I met Raf Simons right away as very warm, spontaneous and curious.”

THE PRESSURE IN HAUTE COUTURE IS ENORMOUS

The film “Dior und ich” from spring, at least as good an advertisement for Dior as the world champion film “Die Mannschaft” for the DFB, could have been a sign that the worlds of fashion designers and fashion marketers can still come closer together after all” wrote fashion expert Alfons Kaiser on Simon’s farewell in the FAZ, while the Süddeutsche Zeitung broke down the workload of a haute couture designer.

“A Dior designer designs six collections a year, twice couture, twice prêt-à-porter, one pre-fall, one cruise; not counting the Capsule Collections outside the series. He has to be present at store openings, give interviews, charm customers, launch campaigns, imagine settings, be present and alert at all times, and if he’s a good boy, he does social media on the side. Time to reflect on the past collection: zero”.

Paris: What is going on at Dior? In his documentary “Dior and I”, Frederic Cheng accompanied Raf Simons in designing his first collection for the French fashion house. Photo: FCIM Productions

For the artist Simons, for whom music, art, performances and literature were not just inspiration from the first collection, but rather wine played a substantial role, summing up, or rather clarifying the kind of world Raf Simons wants to project. For inn it was important to have the time to track down moods, to understand foreign attitudes and to develop their own in order to be able to design fashion that embodies individuality and independence. Two key concepts in the Simons universe which played a subordinate role in the Paris group.

He has made no secret of the fact that Raf Simons also takes a critical view of the world of the big fashion companies; he is not averse to the external constraints under which the big companies have to operate and which are at the expense of creativity. Anyone who has seen Cheng’s film is therefore not surprised by the designer’s decision, he admires the determination with which Raf Simons has always followed his heart, posted Cheng on Twitter.

In the meantime, Raf Simons has returned to Belgium, to his label named after him, with which he recently celebrated his 20th anniversary, and has designed a fabric collection for Kvadrat, which he presented last week.

In the Berlin gallery Schulte he showed luminous fabrics, dominated by colourful stripe patterns in a 40s retro look. And finally, he made it clear to the online magazine Stylebook: “It is neglected to promote creativity, to create space for ideas for talents, so that great design can emerge. That’s the most important thing,” says Simons. “Nicolas, Phobe and I* are already the middle generation of designers. Who comes after us. I don’t see much there.”

Raf Simons has now reclaimed the necessary space for ideas. And maybe he can teach us that it doesn’t always have to be the big stage.