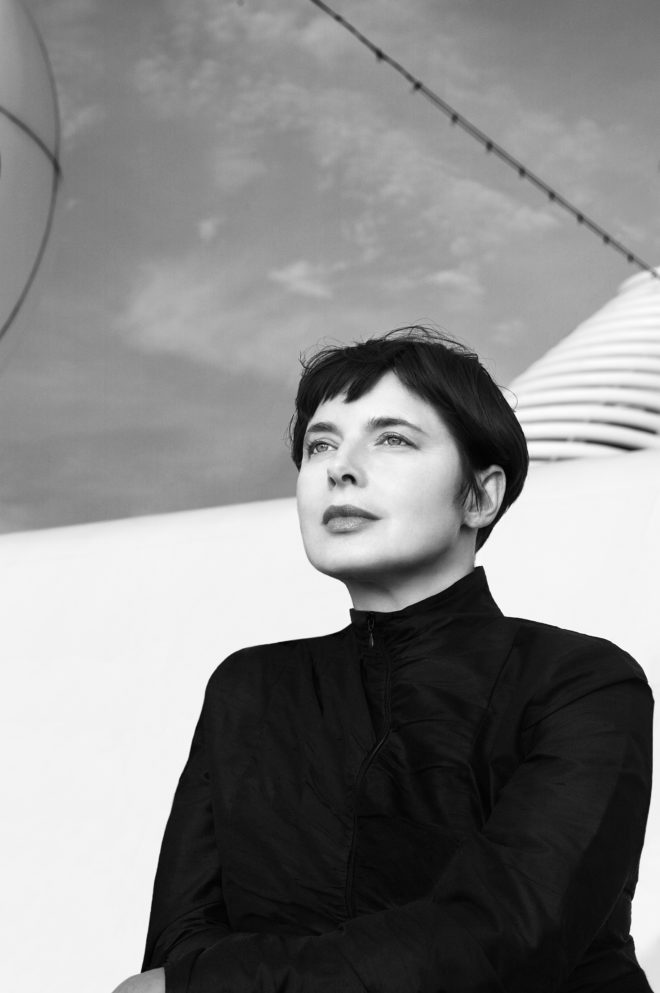 I met Isabella Rossellini in her Hotel in Hamburg, after a long day that had started with a memorable press conference – she had been surrounded  by cameras and photographers in a frightening and intimidating way – followed by several interviews. The actress was tired and had health issues – she has been suffering from scoliosis since childhood. But as the daughter of not just one but two film legends, Ingrid Bergman and Roberto Rossellini, and as someone who became – independently from her parents – a famous icon, she knows how to be professional even in the most difficult situations. 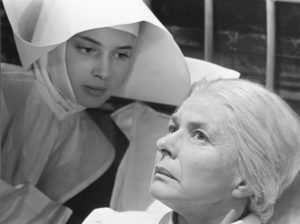 Rossellini, who has been in relationships with two famous directors, Martin Scorsese and David Lynch, sat down in the armchair, took a sip of her tea and stayed as courteous as possible. In general, children of famous parents often don’t like to talk about their parents, but not so with Isabella Rossellini. She even published a book with pictures of her mother in honor of what would have been Ingrid Bergman’s hundredth birthday. And one can tell that talking about her “Mama”, as she calls the late actress, with a tender voice and italian accent, made this long day a little more pleasant for her.

Isabella Rossellini: In 2006 my father would’ve been a hundred years old: He was born in 1906 and my mother was born in 1915. Her hundredth birthday would’ve been in 2015. In 2006 I made a kind of surreal film, it wasn’t supposed to be, I just wanted to explain what kind of talk my father conducted at home, so it turned out to be quite a surreal film and I turned out to play all the directors in it: Fellini, Selznick, Charlie Chaplin … Now we decided to make a book because Mama kept all her stuff.

Did you have the chance to talk with her about this idea before she died?

Isabella Rossellini: I saw her dying. When she died of cancer and I asked her, “Mama, why are you keeping all this paper? I mean you were born in Sweden, you went to Hollywood, then you came and lived with Father in Italy, you moved to France, where you lived several years, then you moved to London,” where her life ended. I said, “Why so many countries, so many moves, always with these things around?” and she said, “I am part of an art form that did not exist in another century. Neither photography nor films, and I worked with the best of the artists and I can’t throw these things away, because I know there is an incredible value in them. And I don’t know what to do with it. Maybe one day an archive,” but at the time she died, there weren’t really archives. So we gave the material to an archive, incredible material, other actors throw things away or separated their private and public lives – it was difficult. Mother’s archive is the most complete archive of a Hollywood actress in the 40s. She also worked in five languages. Her career wasn’t only in Hollywood. She was very present in Europe. The book is not just an homage to her; it’s also a really deep homage to the art form. That’s what this book is about.

How do you reflect on your parents’ relationship?

Isabella Rossellini: She came from a classical background: she used scripts and films and dialogues and everything was storyboarded and organized. My father worked in a style that was revolutionary at the time, called neorealism. It was difficult for them to learn lines, so some of the dialogue was improvised – so the actors and actresses … they had to react. The dialogue wasn’t scripted, they couldn’t learn their lines, because they weren’t professional actors. He did not believe that a Cary Grant could really play a fisherman. My father was looking for that authenticity of a dialogue, just faces, gestures, because – after all – cinema is more images than words. At the time his films came out they were considered very avant-garde and mother wanted to work with him – mother was very adventurous as an actress and wanted to work in different styles and with different people. And this is another incredible thing of her career: She spanned two continents: a full career in Hollywood and a full career in Europe.

What role did your mother play in making the book?

Isabella Rossellini: Of course I lived most of my life without my mother. She died when I had just turned thirty, so she didn’t know my children, didn’t see my career. I think she would be very happy about the book we put together, because the core of it was her: It was her thinking that it was worth saving, and if there hadn’t been this first collection of mother’s work, photography, letters, the book would’ve been different. Maybe just the photos of the set, or paparazzi photos; but she collected all the photos of the great authors, she was friendly with photographers – her father was a photographer so I think she loved photographers.

Isabella Rossellini: The book includes paparazzi pictures, but they are not artistic pictures; they are interesting pictures of an era, the era of paparazzi pictures, of being indiscreet with stars. They sometimes captured the unpleasantness of the paparazzi and of course my mother experienced that too. Not in every city. New York was a city she always loved – you can still see Woody Allen walking in the street today – or Al Pacino and Robert de Niro. But Rome was really difficult. There were places she could not really walk or shop and then the crowd would come. And you can’t move unless you have security, but she didn’t have that; she wanted to live without security. And so she often had to stay home. You had to deal with the paparazzi. Yes, it was unpleasant, paparazzi are awful.

How would you define the difference between a paparazzo and a photographer?

Isabella Rossellini: The paparazzo is somebody who steals a picture; the other one is somebody who understands lighting, who might do a portrait of a character … it’s a completely different thing.

It’s possible that she felt comfortable; her father already photographed her. But it takes more to be in front of a camera than just being an actress. You have to play somebody else’s personality, somebody else’s character and emotions, but it’s unusual to have photos of your mother as an infant. Because the camera you take nowadays did not exists, so a lot of people born during the First World War like my mum did not have snapshots of themselves as a child, so this is really rare. It is another exceptional aspect of the book: My mother was photographed from day one to her death, so the book tells really the complete story of a woman.

What are your favourite pictures of her?

Of course I remember my mum not only through photographs, but I remember my mum as my mum. As a person I lived with, so the photographs capture certain moments or give me a glimpse of her life before I was there. For example, the photos of her as a child or in Europe. My mother kept next to her bed a photo of her mother, of her father, of an aunt. My mum’s mum died when she was two years old. She did not remember her mother. She did remember her father. She was really attached to her father. They died when she was fourteen – after that she lived with her Aunt Ellen. She died. With sixteen she was an orphan. She had these three people next to her bed. And when she died I noticed, the frames had these little lip marks, because I think she kissed them every night.

Would you say Ingrid Bergman was an independent woman?

I met Isabella Rossellini in my capacity as director for ARTE Metropolis. The report I made was not identical with the interview and is unfortunately no longer available online, but you can find more new cultural reports by me on the ARTE Metropolis website.