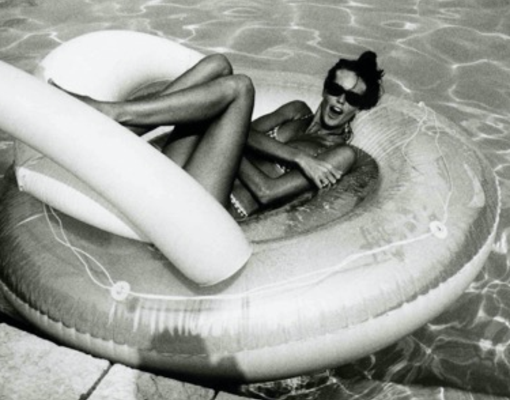 Jean “Johnny” Pigozzi took up his Leica already as a teenager before going to study in Harvard. He developed a distinctive and exclusive style, observing the festive everyday life around him. Being influenced by photographers such as Helmut Newton, Robert Frank or William Klein and befriended with pop-stars such as Andy Warhol or Mick Jagger, with whom he traveled the world extensively, Pigozzi established a very close and sincere way to portray his friends and companions.

When the instant becomes eternal

His photos are capturing the moment, when “the instant becomes eternal” as Bono writes in his foreword to Johnny Pigozzi’s Pool Party monograph. Pigozzi’s catching and refined snapshots document the beau monde get-togethers around the notorious “blue pool”. The pool is an integral part of famed Villa Dorane designed by Ettore Sottsass and realized in 1953 at Cap d’Antibes, hosting since its inception the most important actors, models, entrepreneurs, musicians and photographers. This unique cultural happening bringing all different worlds together during the Cannes Film Festival is portrayed in such a natural way, that the viewer becomes part of the creative spirit surrounding this genre defining photography, predating arty nightlife shoots that followed after 2000 and are known from various lifestyle and fashion publications and blogs nowadays.The exhibition at Gallery Gmurzynska featured over thirty black and white photographs that were shot between the 1980s and the 1990s granting a rare glimpse into the world around the pool, picturing Sharon Stone, Elizabeth Taylor, Michael Douglas, Elle Macpherson, Naomi Campbell, Mick Jagger, Bono, David Geffen, Calvin Klein, Kristen McMenamy and Helmut Newton among many others.

Besides his artistic endeavors Johnny Pigozzi is also a significant collector. Most importantly he assembled the world largest collection of contemporary African Art. The collection is based in Geneva and has been presented in world-renowned institutions such as Tate Modern in London, Guggenheim Museum in Bilbao, the Grimaldi Forum in Monaco and at the National Museum of African Art in Washington D.C. More than that, the newly opened Fondation Louis Vuitton plans to realize a show of African Art featuring Pigozzi’s collection in the fall of 2017.

For all Pigozzi Fans who missed the exhibition – probably most of you – I highly recommend to get the book Pool Party published bei Rizzoli. It contains more than 100 pictures from the personal archives of photographer Johnny Pigozzi and spanning six decades of illustrious parties and glamorous photoshoots