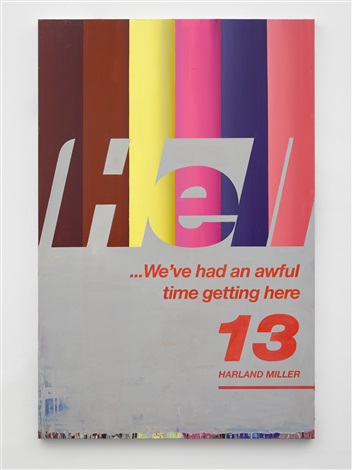 Harland Miller has been associated with White Cube  in London for several years. He made a name for himself in Great Britain, mainly through his Penguin paintings: book cover paintings based on the British Penguin books. But in contrast to the gallery’s big shots – Tracey Emin and Anselm Kiefer, for example – Miller was less well known internationally. That is changing now. After a major exhibition at Blain|Southern in Berlin, Jay Jopling, owner of White Cube and a close friend of Miller’s, is now showing the artist’s large-format pop art works on two floors at Mason’s Yard … 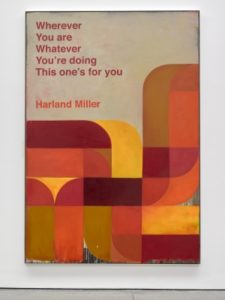 One Bar Electric Memoir includes two series of paintings that continue and expand Miller’s investigation into the relationship between viewer, text and image.

The first series of large-scale works draws on Miller’s extensive archive of psychology and social science books, which date from the 1960s and ‘70s. Characterised by their bold and colourful abstract covers, these books embraced a positive attitude and the possibility of ‘fixing’ disorders through a process of self-help. The geometric cover designs not only drew parallels with contemporary abstract painting, but also provided a foil to the darker aspects of social neurosis addressed by the books’ content. As Miller has commented, they hail ‘from that very particular, positive, post-war era when information was being made more available and being hungered for, too. It was often practical and pre-jargon and to do with fixing things – fixing society, fixing yourself…’.

In Miller’s paintings, three-dimensional architectonic forms in bright, pop colours float against solid saturated backgrounds and are paired with fictional, sardonically humorous titles such as Reverse Psychology Isn’t Working (2017) and Immediate Relief… Coming Soon(2017). Occasionally, the same title appears on different compositions, highlighting how colour, form and context can change both the rhythm and meaning of words. Similar to the titles, Miller’s abstract imagery can also be read in different ways. Commenting on the work Armageddon – Is It Too Much To Ask? (2017), for example, he says: ‘It’s an image that you see one way – then, when you relax, it flips and, no matter how hard you try, you can’t see it the original way. It’s symbolic of the way you read the title.’ These works reflect a departure for the artist, whose previous series of Penguin paperback paintings were re-appropriations of an existing object. Here, for the first time, Miller creates his own designs, focusing more closely on the impact of the image itself. 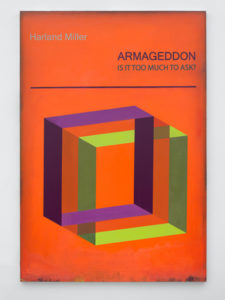 In another series of fictional book cover paintings, Miller depicts the outlines of letters in a range of typefaces and colours, intersected or layered over each other to create short, enigmatic words such as ‘Up’ or ‘If’. Through a process of isolation, overlaying and re-connecting, Miller creates a sense of depth in the image that deconstructs and abstracts the meaning of language itself. With their bold, saturated colours, these paintings reference American abstraction and, in particular, Robert Rauschenberg and Ed Ruscha’s use of vernacular signage and motifs. Miller has said about this series: ‘The idea is to make paintings that are just words, in contrast to the titles of previous works’. 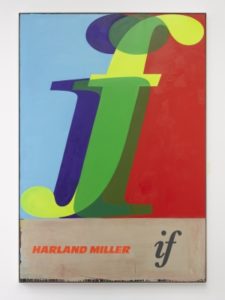 In both series of paintings the artist continues to use his own name as author. While the presence of Miller’s name alludes to the actual authorship of both image and text, fact and fiction become blurred, allowing for the artist’s deadpan humour to provoke, question and draw attention to the context and content of each work.

You want to find out more? I visited Harland in his studio and talked with him about his work.