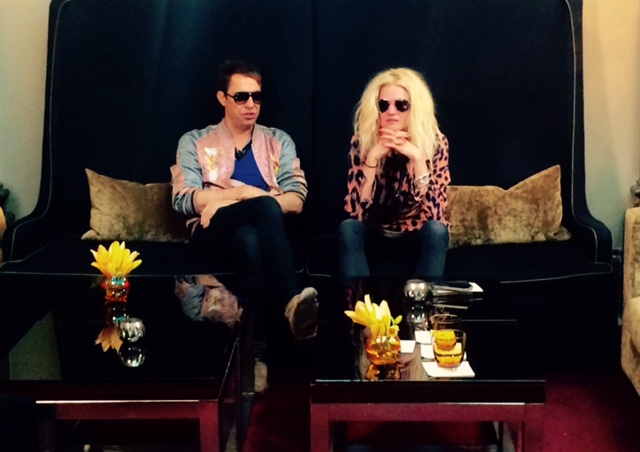 Five questions to… Alison Mosshart and Jamie Hince from The Kills

Jamie Hince and Alison Mosshart from the Kills could also be called the “Bonny and Clyde” of garage punk.  Time to talk to the two rock stars before their Berlin live concert on the roof terrace of Berlin’s Hotel de Rome about their album Ash & Ice and their deep friendship. Because both are closely connected …

You two are not only a band, but also close friends. How did your collaboration on the new album Ashes and Ice work out?

Jamie Hince: Recording the album was a three-part process, in the beginning we worked separately. I was in London, Russia and Jamaica, that’s where I travel to write and Alison was in Nashville most of the time. We’ve been very far apart, we write separately at first, each on his own, then we meet. The next step was to rent a house in the Hollywood Hills, a pretty rocked house, and there we did a kind of sound experiment. A mix of sessions, songwriting and recording. Then we went to New York to the Electric Lady Studios, the former studio of Jimmie Hendrix. And there we metaphorically put the last nail in the coffin. Then “Ash and Ice” was finished.

As for friendship, it’s the most important thing in the world. Despite that, or perhaps because of that, we have to prove ourselves to each other over and over again. Alison is so super talented, she constantly surprises me anew – and that also in our working relationship. If you want to create something as a band, you can be friends as well as you are, even went to school together, if the other one doesn’t inspire you creatively, it will fall apart. We have this brilliant mixture of love and talent.

The Kills live at Coachella

How have you developed over the past few years?

Alison Mosshart: We’ve been making music together for fifteen years now and there are many things that don’t change, but in songwriting we are constantly evolving. I hope that we will improve or learn new things along the way. Every time we record something new, the challenge is not to repeat ourselves and to break new ground until we feel at home. In our friendship we are as silly as ever. It is simply difficult to explain why this works so well with us, we have never been able to do that before. We simply do not question our friendship, but are happy that we have found each other.

What have you learned from each other in all this time?

Alison Mosshart: you don’t know anything?

Jamie hince: i don’t know, i didn’t really learn anything from alison.

Alison Mosshart: neither did i from jamie.

Jamie Hince: We’re not really teachers for each other, but I suppose we’ve learned something from each other over the years. I think it’s easier to say which qualities of the other are important to you. I would say: loyalty, spontaneity, not being afraid and really literally elevating one’s life to art instead of just pretending. I’m less successful at that, for example, I don’t like making mistakes in public. I am much more private, I am much more afraid of being ordinary. Alison, on the other hand, is proud of everything she does, she has simply decided that everything she does is part of her art. I may have learned that from her.

Many people cannot believe at all that a cool man and an attractive woman can simply be good friends. Yet it is also enriching for men and women to be friends.

Alison Mosshart: Exactly. I think it helps us all to understand each other better. It’s just terrible when you don’t allow yourself or others to be friends with someone just because they’re not the same sex. You sell yourself short. But people are…

Jamie Hince: It’s totally obvious to me. Maybe I am a girl. I do girls’ nights out and it’s just…

Alison Mosshart: It’s so funny when we go out, to a restaurant for example, there’s always five girls and Jamie. And Jamie is just…

Alison Mosshart: For us it’s normal!

Jamie Hince: I was just about to come out and unpack all the clichés. Then I thought no, I’d better not. Ha ha. I was going to say I just like watching movies and eating ice cream because we do that sometimes.

What is the secret of your friendship?

Alison Mosshart: I think the secret is… oh, you just can’t explain what kind of relationship he and I have, we’ve tried that so many times and always failed. We don’t want to challenge or risk it, we love what we do together and we are just so happy to have found each other …

BOX IN A SUITCASE is a project of BOTTEGA BERLIN PRODUCTIONS