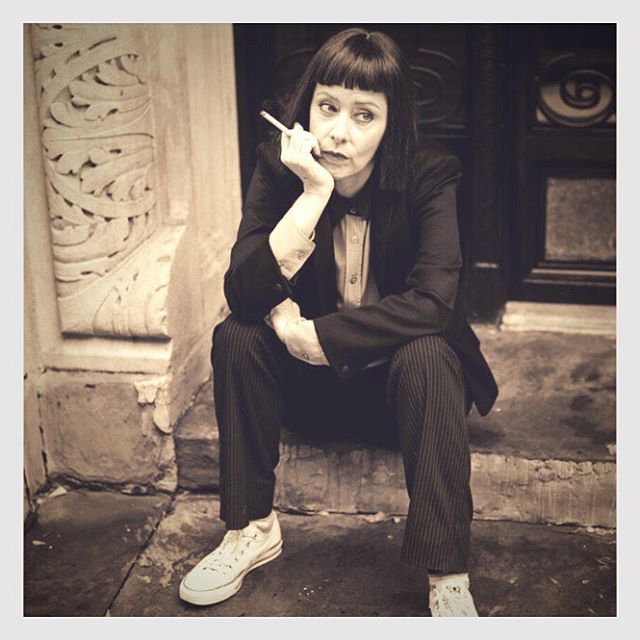 With her clear voice, feminine appearance and poetic lyrics, Suzanne Vega wrote music history in the late eighties. But the most remarkable thing about her songs was probably how she managed to tell real stories with her lyrics – and that’s why we never forgot her voice. Suzanne’s songs are like short movies that play in front of your mind’s eye while you listen to her. That’s why we still remember every single line of songs like “Tom’s Diner” or “Luka” – evergreens that also inspired famous fellow musicians, for example Prince. Suzanne herself however finds her greatest inspiration in the literature of Carson McCullers. Now she has even dedicated her latest album to the American writer. BOX IN A SUITCASE talked to her before she played a concert for the French-German TV station ARTE in Berlin.

You just released a new album, a concept album. All songs are based on the novels of Carson McCullers, your favourite writer, who you already devoted a play to several years ago. What is so fascinating about her?

I began reading Carson McCullers when I was a teenager and I loved her work from the very first story I read. Her voice that she uses to tell her story is very unique and truthful and so this began a lifelong interest in her work and later on in her life. I feel that she’s a very modern woman. She dealt with sexuality, gender, civil rights, the rights of black people – these are all issues which are very current in my country, America. So I felt kind of a kinship with her.

I saw some picture where you even look like Carson McCullers …. Where else do you see similarities?

She has had a very strong work ethic. She had a lot of discipline she wrote every day of her life. I would not say

I saw some pictures where you even look like Carson McCullers … Where else do you see similarities?

She had a very strong work ethic. She had a lot of discipline. She wrote every day of her life. I wouldn’t say I write every day, but yes, I write very carefully, it takes me a long time to finish a project sometimes, so she has high standards, I have high standards … I suppose that is something we have in common. One thing I realized right away when I started dealing with her was that she was very free. She dressed as a female or a male, very often as a male, free to think whatever she wanted to and was putting it on a page. She was a very free person especially on a page. Not always in her life, but on a page. And I feel that way. I feel that my imagination takes me all these different places I can imagine to be male or female or sometimes it doesn’t matter; I could be a thing. So I want that freedom that she has. And I love her because she always retained her childhood, childish qualities. Even though she was older at the end of her life and she had experienced a lot of pain, she was never cynical. She always had this kind of open quality.

What did you learn from dealing with her literature and her life?

Thats exactly what you did with your songs „Tom’s Diner“ and „Luka“. Luka for example tells the story of a little boy who is facing domestic violence. – What did inspire you to write this song?

I was always inspired by Lou Reed the musician. To me he was fearless. He wrote about everything he wanted. He wrote about violence. There was nothing really that he wouldn’t tackle. I felt that was an issue that should be written about. And there was this boy, he lived in my building upstairs, he was not an abused child but his name was Luka. I took his name and wrote the song about his ideas. I was very surprised people understood what it’s about, and I was surprised people wanted to hear it. In the beginning, when I began to sing it, most people looked sad or upset. It was my manager who said it could be successful. They produced it and when it went on the radio it became a hit immediately.

The year “Luka” came out 1987, I received this letter. I’m pretty sure it arrived at my manager’s and he sent it to my house. It was handwritten and signed by Prince and it was this beautiful letter with a flower on it, and it said: “Dearest Suzanne, I thank you for “Luka” every time I hear it.” It was very moving. And I framed it and had it on my wall for many years.